8. How to Reconcile FBA Shipments

PLEASE HAVE EVERYONE ON YOUR TEAM WHO DEALS WITH INVENTORY STUDY THIS COURSE.

We also highly encourage you to book your one-on-one onboarding call WITH YOUR TEAM so everybody is trained. :) Schedule an on-boarding

This will help to ensure we don't double-count any inventory coming from a warehouse, and also ensure we assume the correct lead time for arrival to FBA fulfillment centers.

When you log in to SoStocked -- if you're on your Forecast page -- you might see this red warning up here that says " you may have inventory that is double-counted." Now, click on the FBA shipment button up here.

It's going to take you to your Orders page. Here is a purchase order that I produced in SoStocked -- 36 units of this lampshade that I'm sending direct to Amazon. We expect it to arrive at Amazon sometime around July 24th. Now, I also went to Amazon Seller Central and created an FBA shipment for those lampshades which is also right here (the one under the Reconcile Shipments column).

SoStocked doesn't know that these 2 are connected yet, so the term " Reconcile Shipments" simply means to connect this FBA shipment with this purchase order so that SoStocked knows that this is the same inventory and we're not going to count it twice. If this was coming from a warehouse, we would also want to deduct this inventory from a warehouse, put it on some kind of a timeline, so that we should expect it to arrive at Amazon at the same time as this P.O.

So when SoStocked finds your new FBA shipments that you've created inside of Seller Central, they will show up right here in the Reconcile Shipments column.

You can go up here and click on the FBA Shipments dashboard which will open up a page like this.

Then, click on the Reconcile tab. It will filter everything out except for the FBA shipments that you need to reconcile.

You can just click this button right here, and select "Reconcile".

Then, you're just going to go through this process. You'll be asked if you would like to deduct these units from your warehouse inventory -- it's either yes or no -- if you choose yes, you'll have to choose where is that inventory being deducted from.

If this is coming directly from a supplier, then there's obviously nothing to deduct so simply click on the green " Yes, reconcile" button. It's not going to connect this to a purchase order or a work order, it's just going to send it right into Amazon. Once that FBA shipment gets checked into Amazon, it will be reconciled and we'll expect it on its way without a problem. 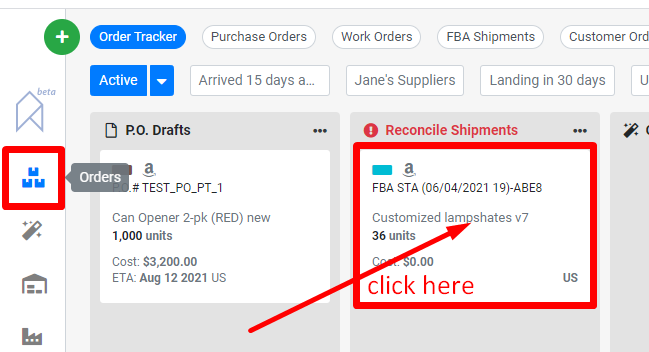 Here's another simple process of reconciling a shipment. Click on this shipment right here. 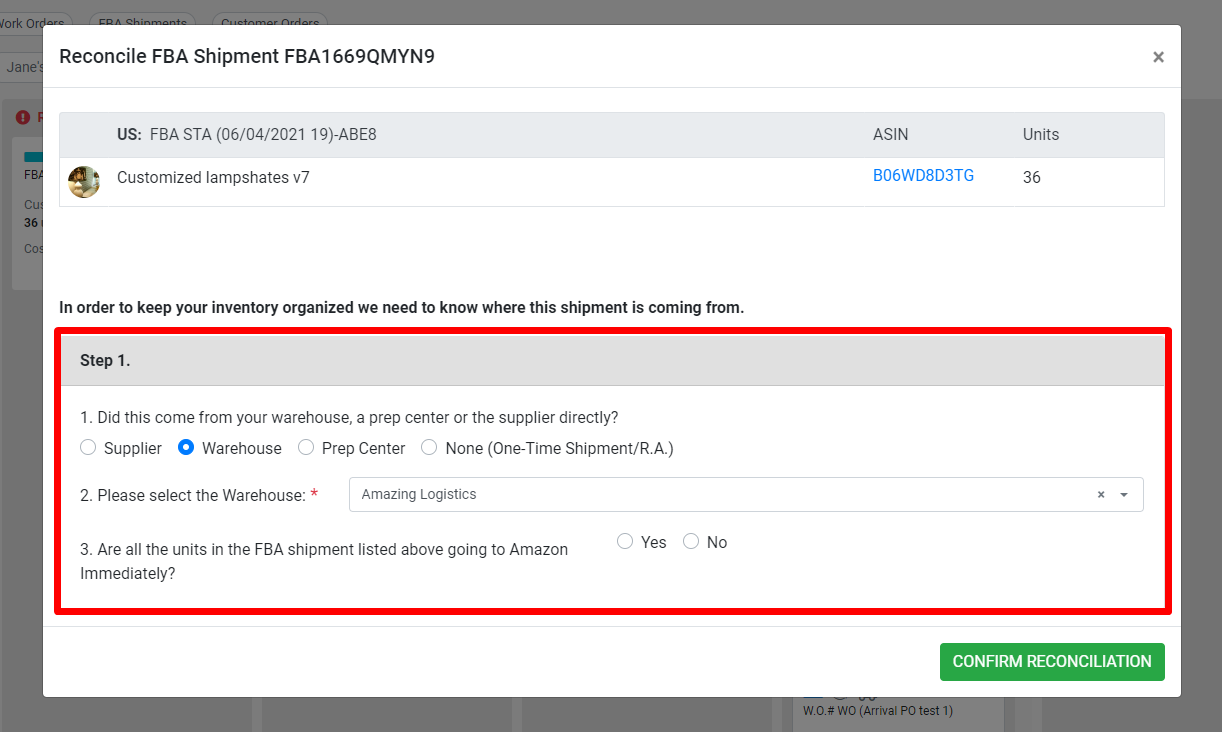 It's going to give us some options -- the first question is, "Did this come from your warehouse, a prep center, or the supplier directly?" and you have to choose which one did it. You also have this option of "None" and just do a one-time reconcile. 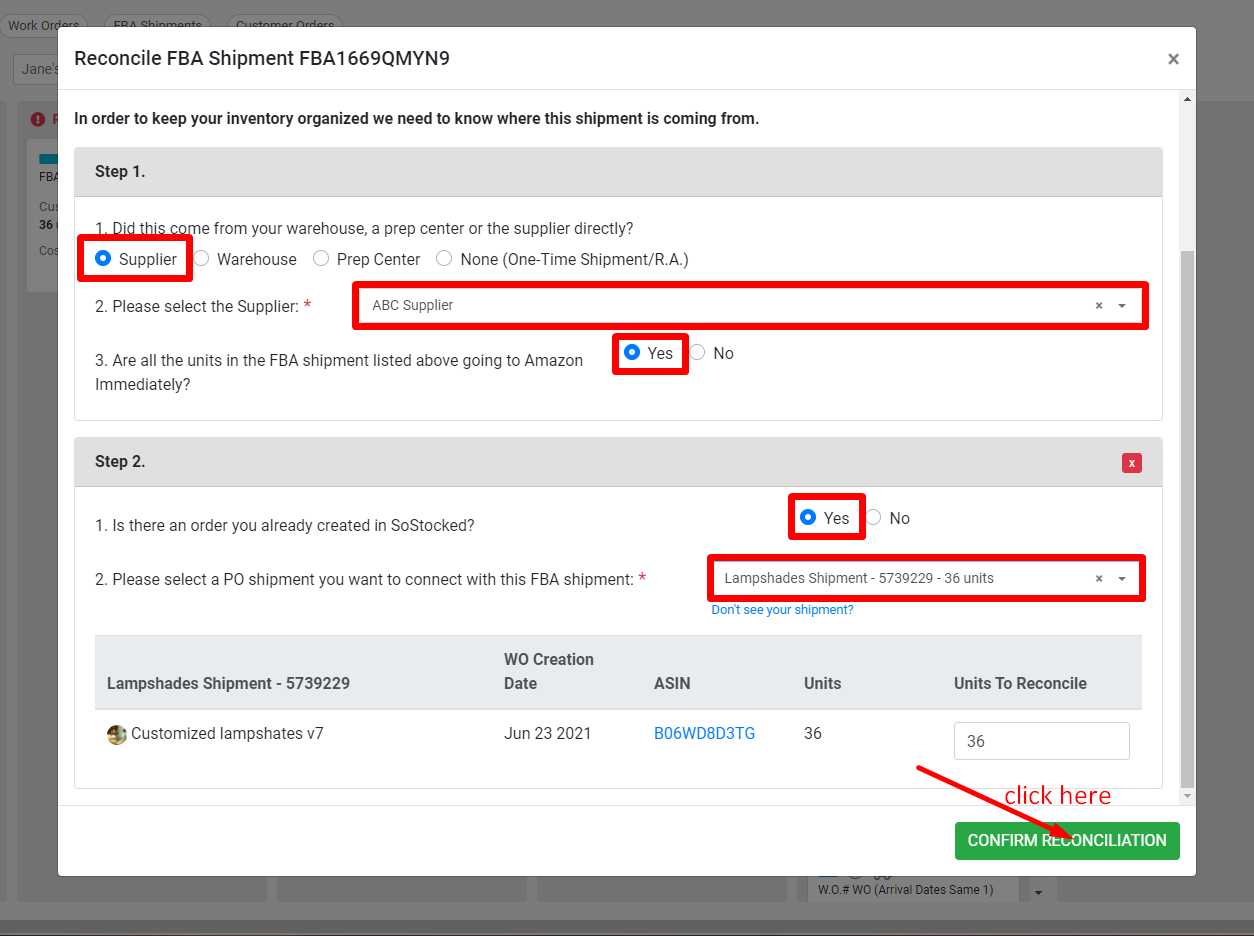 If it's coming from a supplier, then you can choose which supplier it's coming from. You can also choose if it's going to FBA or not -- in this case, all of it is going to FBA. Then, you'll be asked if there's an order you already created in SoStocked, so in this case, it's "Yes" because I did create that lampshades purchase order and I can choose it right here. Once you're done, click on the green " CONFIRM RECONCILIATION" button down here. 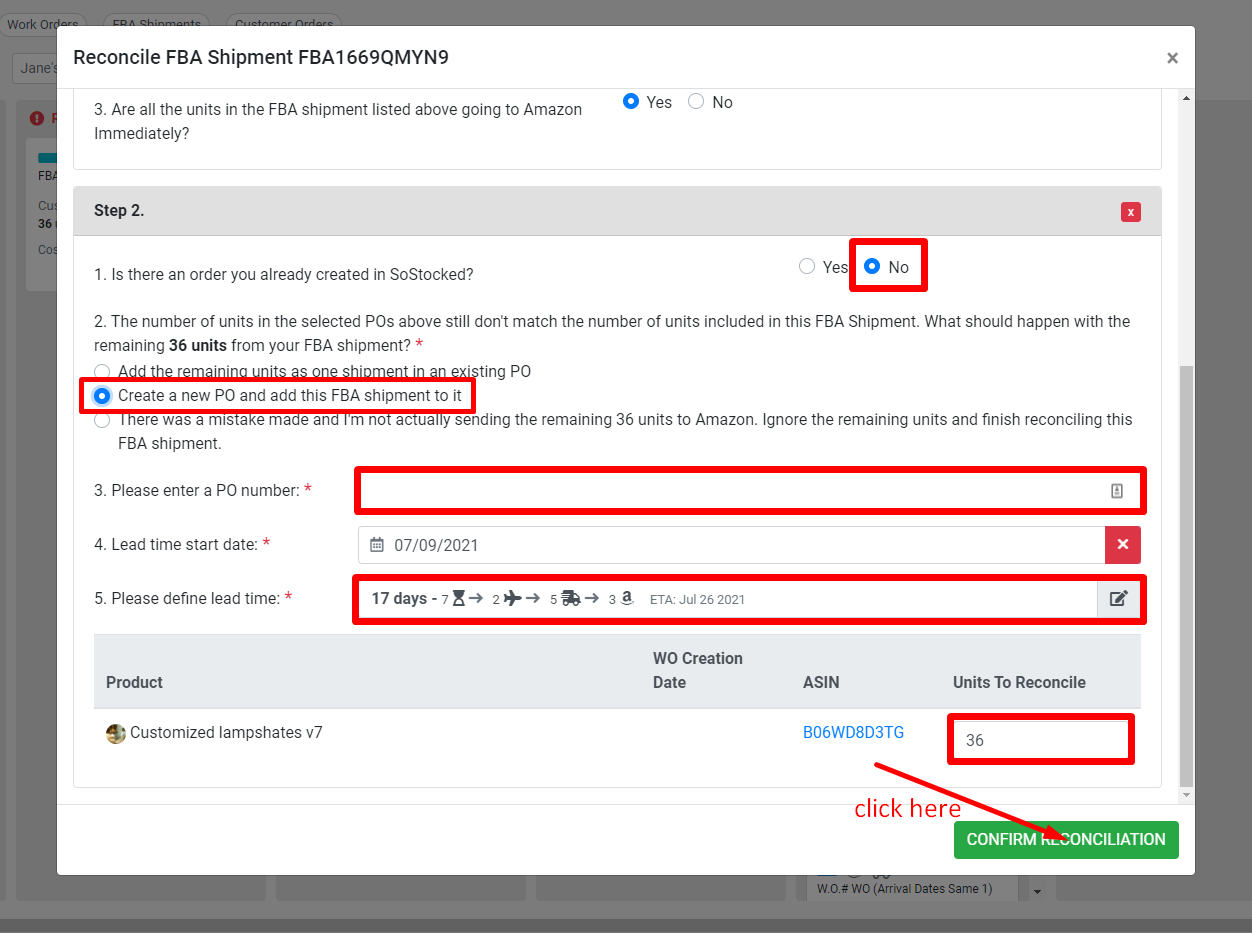 The other scenario is that you're creating this FBA shipment in SoStocked because you created it on Amazon but you have not created a purchase order or a work order yet. You can actually create a P.O. or a W.O right here and it's very simple -- in Step 2, when you're asked if there's an order you already created in SoStocked, select " No". Then, select the "Create a new PO and add this FBA shipment to it", give it a PO number, choose your lead time, and put the total number of units going in. Once you're done, click on the green "CONFIRM RECONCILIATION" button. 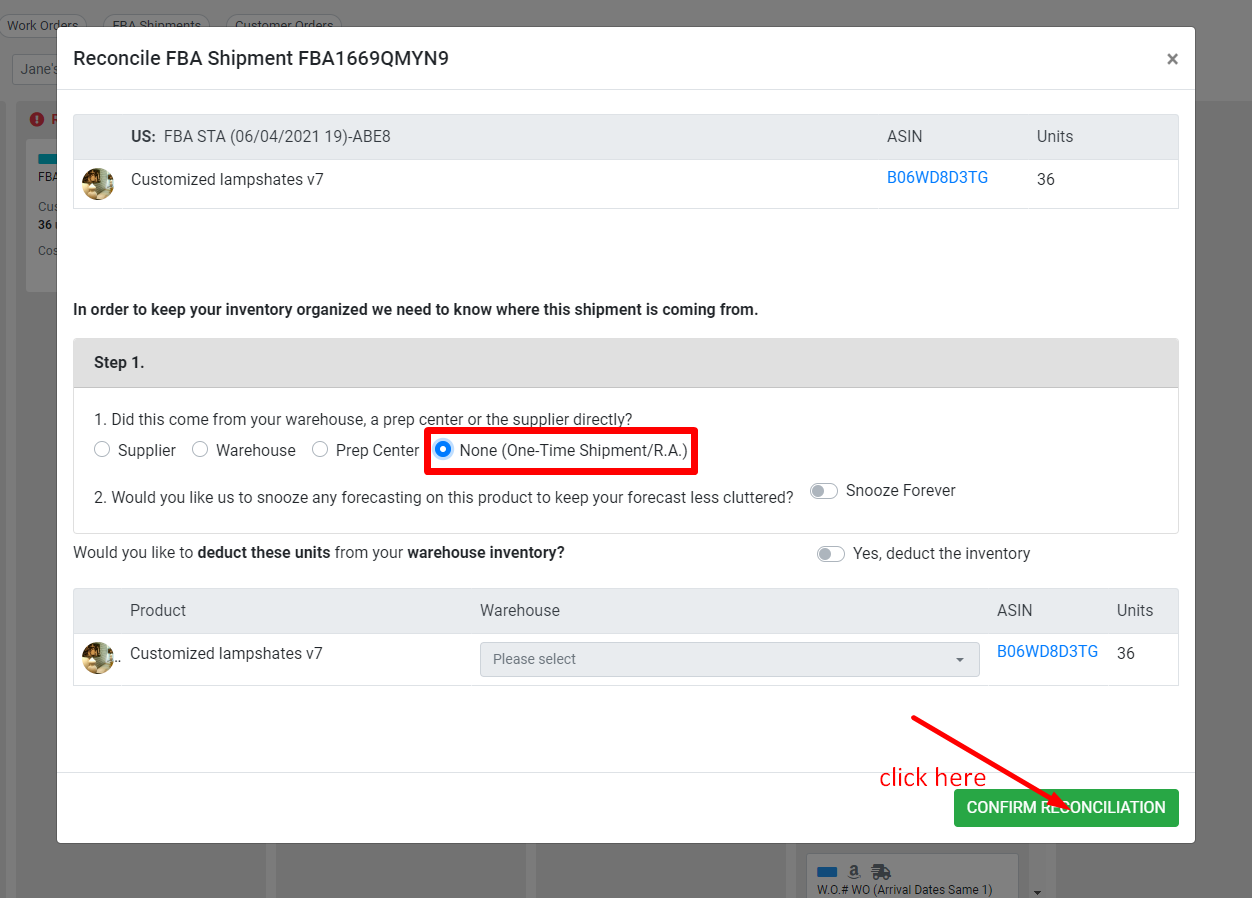 Another option is this one-time reconcile where it will not create a purchase order or a work order. You just click that "None (One-time Shipment/R.A.)" button and you can just send it directly into FBA without creating a P.O. or a W.O., bypass SoStocked's purchase order/work order system, and it will just put it on that arbitrary timeline into FBA and count it as incoming.

Now, the forecasts are basically taking all of your adjusted velocities which are these numbers here -- all the inventory that you have at every various stage of production, to transferring, to checking in at FBA, to already at FBA -- to figure out how many days do you have left until you stockout.

As of now, you still have to go to Amazon Seller Central to create your FBA shipments. When you're selling on Amazon, you go to Amazon Seller Central and create your shipping plan and FBA shipment then you send your shipping labels to either your supplier, your warehouse manager, or to whoever labels the cartons and sends them ultimately into Amazon FBA. So that part of the process is still done manually until we're able to program that into SoStocked. Every time you create an FBA shipment, it's going to show up inside of SoStocked the next time we do our Amazon API data pull. Currently, we're doing 2 data pulls per day -- so if I were to go to Amazon right now and create an FBA shipment, it's going to show up in SoStocked.