How to Reconcile FBA Shipments

What Does Reconcile Mean?

To reconcile an Amazon FBA shipment means to match up FBA shipments to SoStocked Purchase Orders or Work Orders, so as to accurately account for every unit. Whether you are using our PO / WO system or not, you always need to reconcile FBA shipments so that SoStocked can accurately forecast when that FBA shipment will arrive. This will help to ensure we don't double-count any inventory coming from a warehouse, and also ensure we assume the correct lead time for arrival to FBA fulfillment centers.

How to Reconcile an FBA Shipment

So if you make a purchase order say 2,000 units of a product and then you make an FBA shipment of the same 2000 units. There's a chance that it could show up. And it could be double counting. 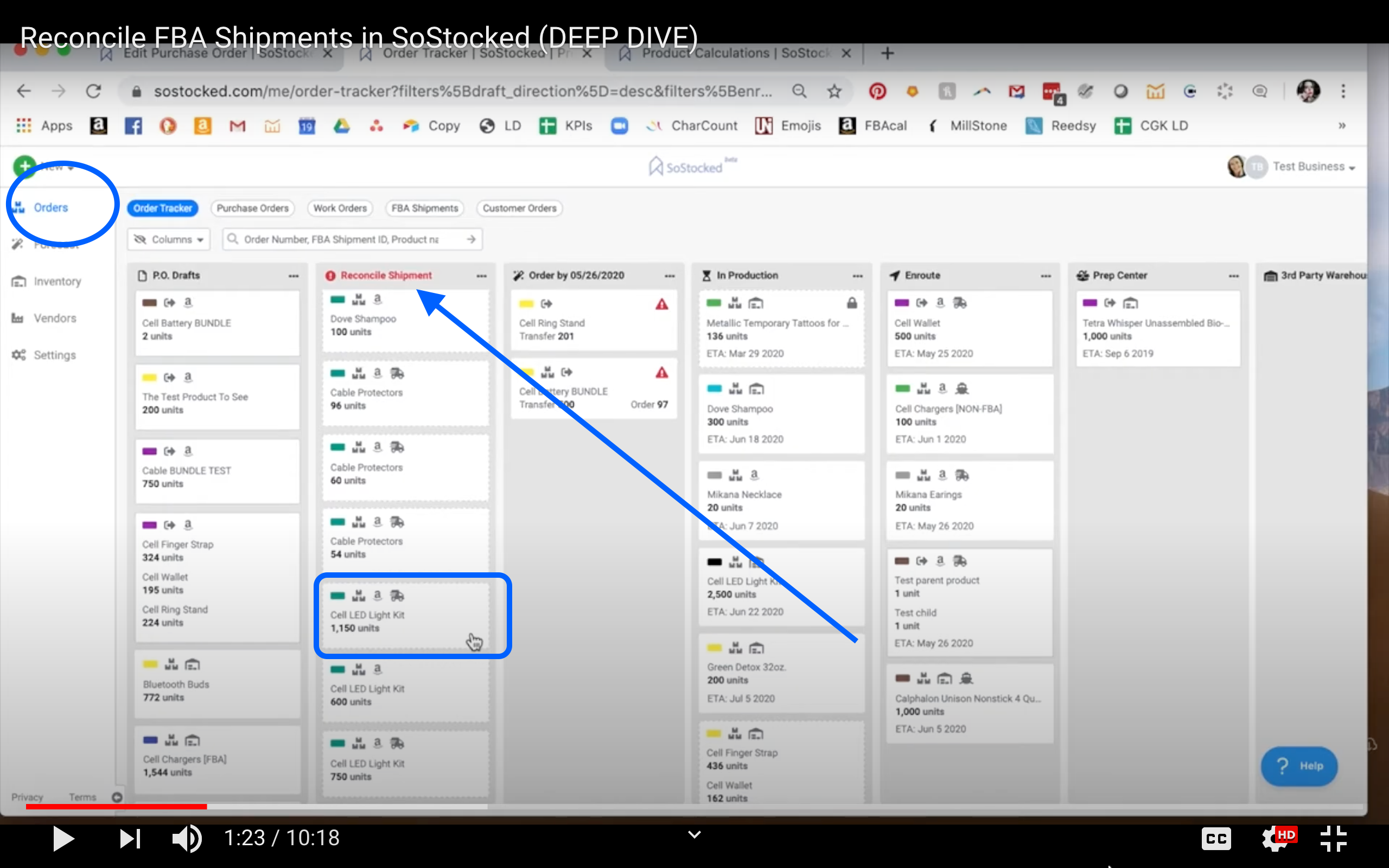 Assign an FBA shipment to the Purchase order.

From the Orders page, look under the column that says "Reconcile Shipment" and click on the purchase order (PO) that needs to be connected to the un-reconciled FBA shipment. 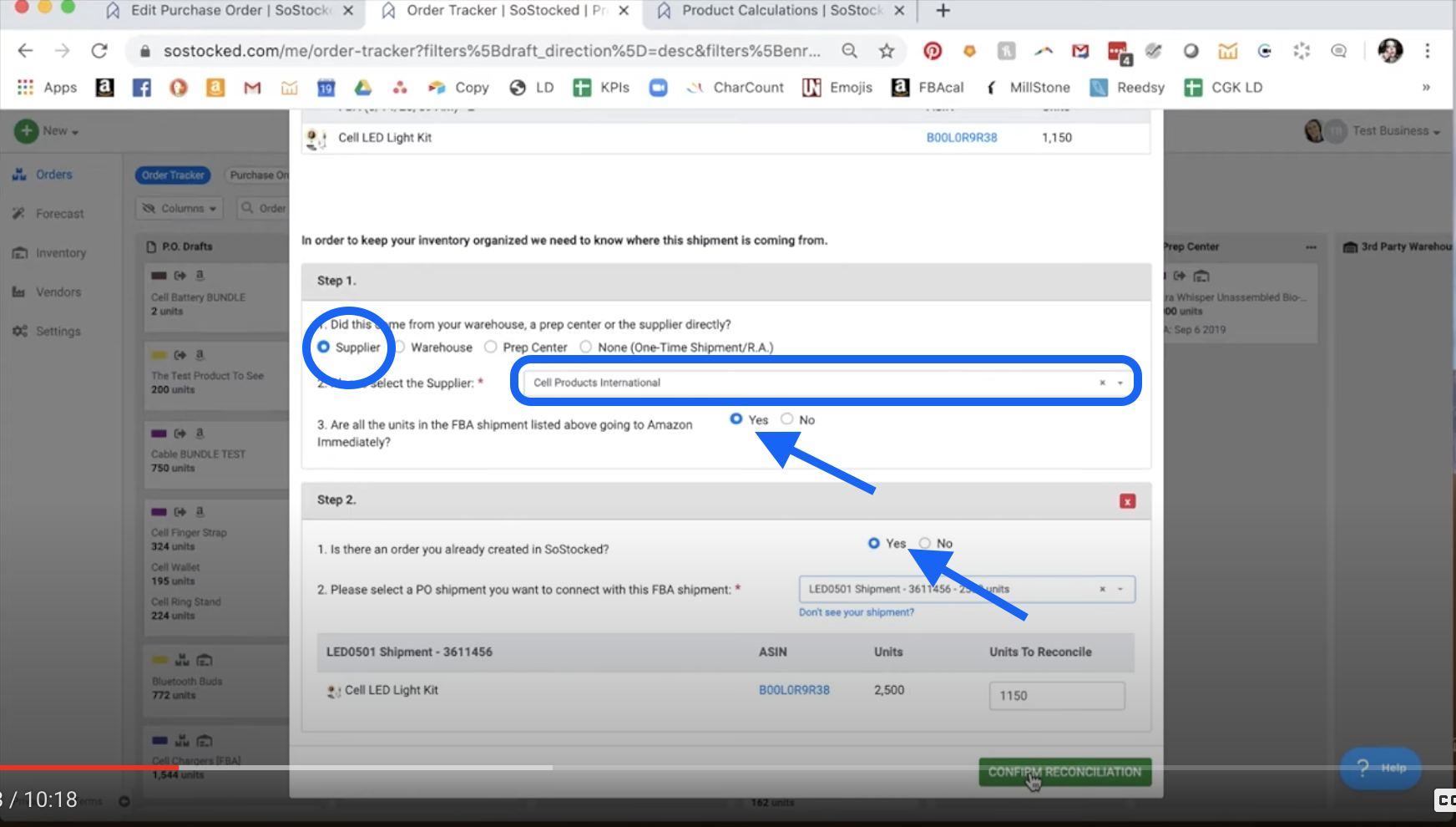 On this pop-up you will do the following:

1. Select "Supplier", as all POs come from suppliers

2. Choose the supplier from the drop-down

3. Select "yes" for Are all units going to FBA?

4. Select "yes" for Is there an order created in SoStocked?

5. Choose the FBA shipment ID from the dropdown. 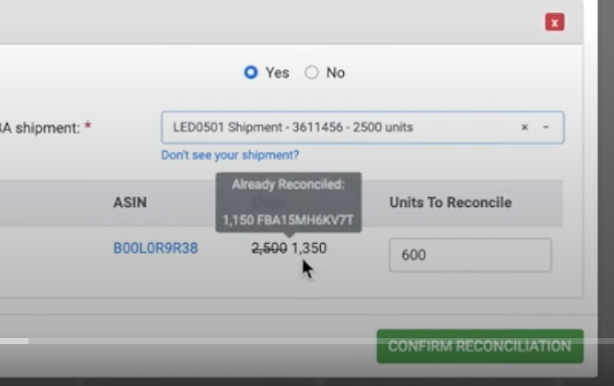 Repeat this step for as many FBA shipments that are connected to this PO.

You can see how many units you have left to reconcile here. 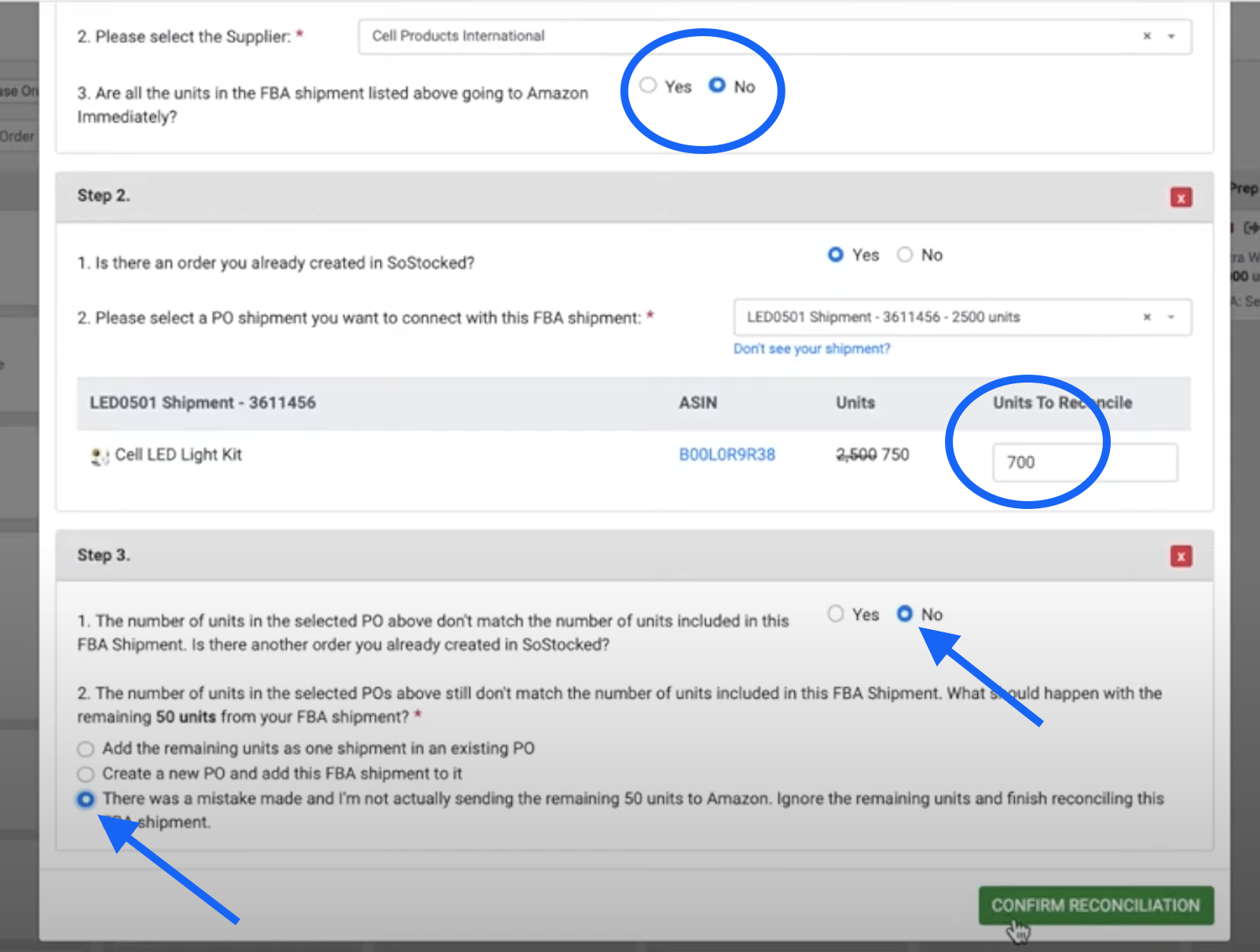 Let's say on the last one you miscounted and made a mistake and you're not really sending in that entire amount of inventory, how do you correct that? You thought it was 750 units going to Amazon but found out it was only 700.
Find the FBA shipment that was supposed to be 700 but was erroneously marked as 750. Is there an order we already created? Yes, we'll find that same order.
And now this one says 750 we say no, I'm only going to send 700 confirm reconcile.
Now, it's going to give us this about other options. The number of units does not match. Is there another order you already created? We say no. So what are we supposed to do with these other 50 units? I'm not actually sending it and it's going to remove those 50 units from being counted anywhere in your software.
So we click confirm and this entire purchase order has been reconciled now. 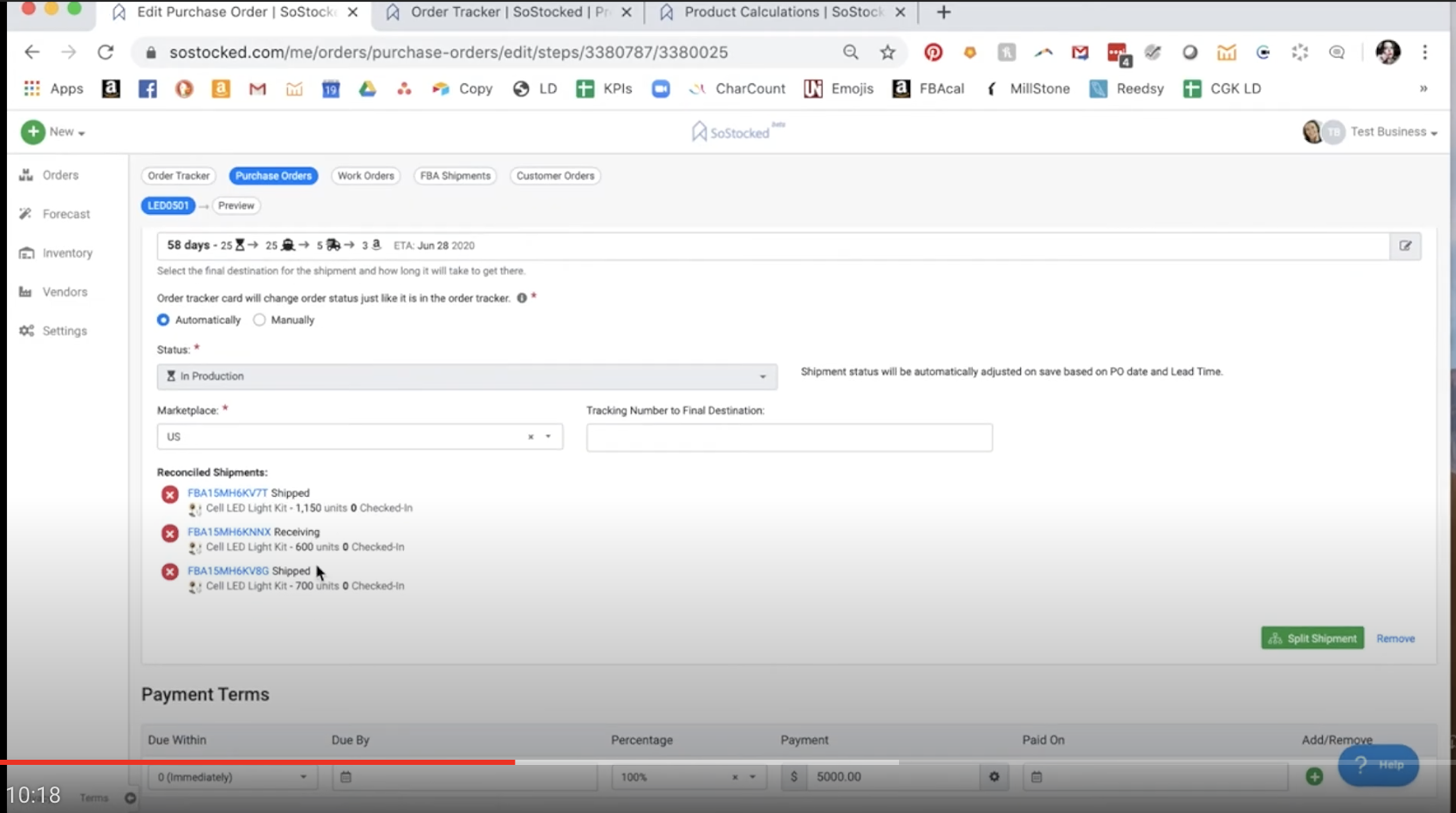 When you go to locate this purchase order, you will see that it has assigned the FBA shipments to the purchase order. So you see here, right? And there's that 700 units checked in. 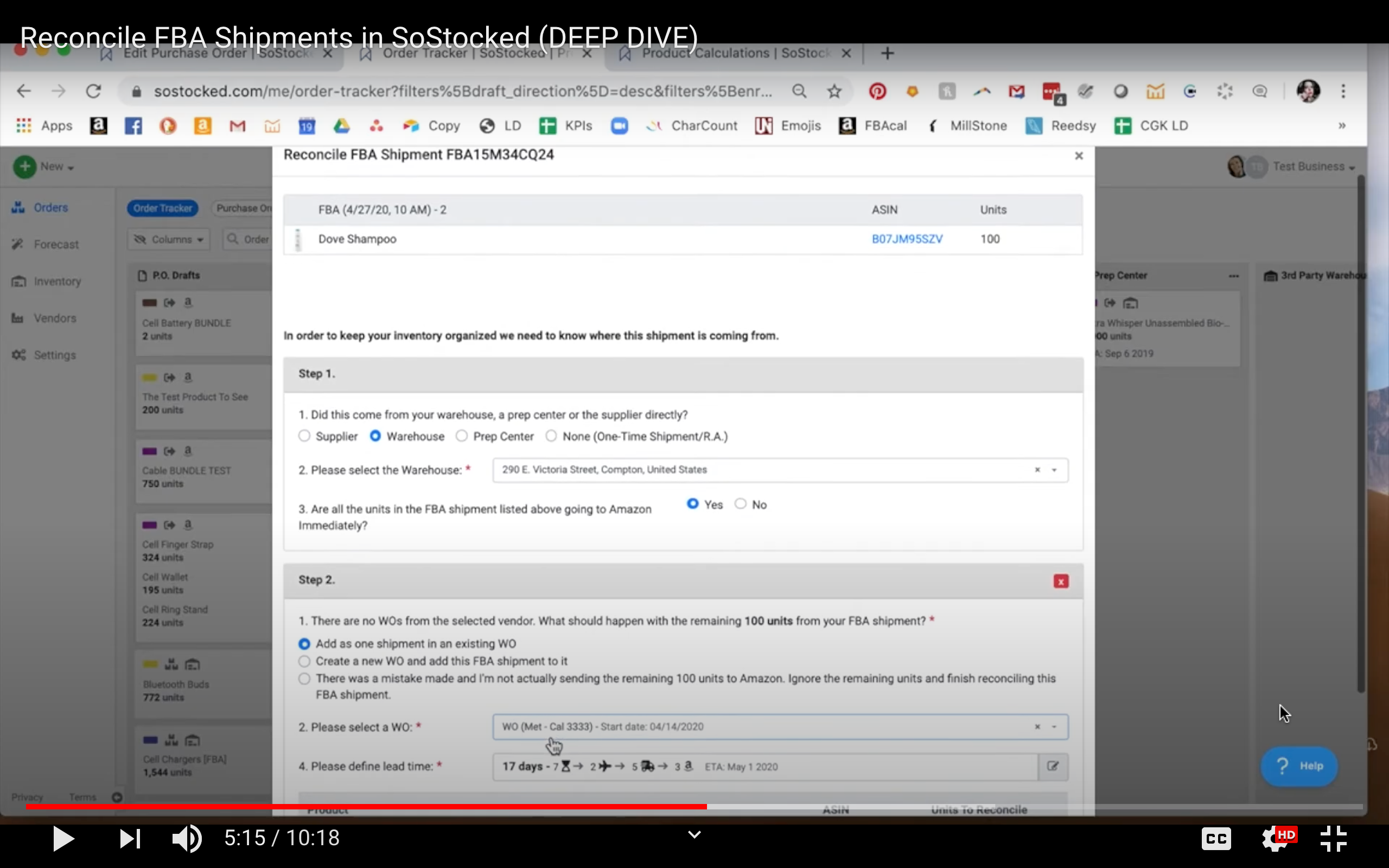 Now, what about if we had a work order (WO)? A work order is different from a purchase order in that it's an instruction to your Warehouse. You're not actually purchasing the inventory, you're just moving the inventory from your Warehouse or telling your Warehouse to do something with your inventory.
So let's look at this Dove shampoo WO. And we're sending it from our warehouse. "Are all units going to Amazon?" We say yes.
So we can add it to an existing work order. Let's add an additional shipment to this work order and let's save that.

I actually wanted to adjust the lead time to start on that same date (4/27). I know that there is no production time, so I'm just going to change this to "Ground Freight" and I'm going to say there are around five days to deliver by ground. And so you can actually build out your work order very quickly right from here. And adjust the new ETA and I record my entire amount of 100 units and then I'm going to click confirm. 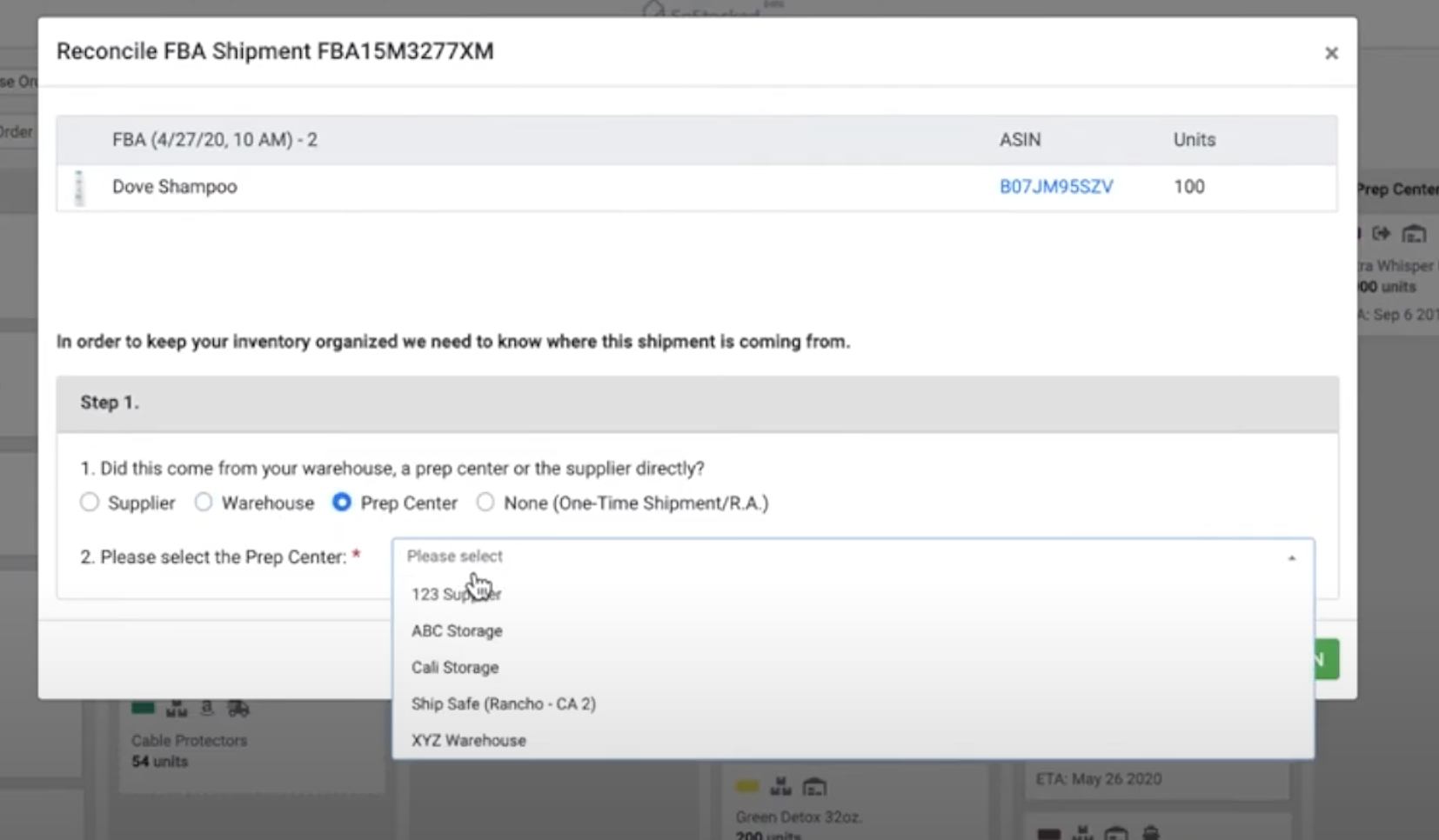 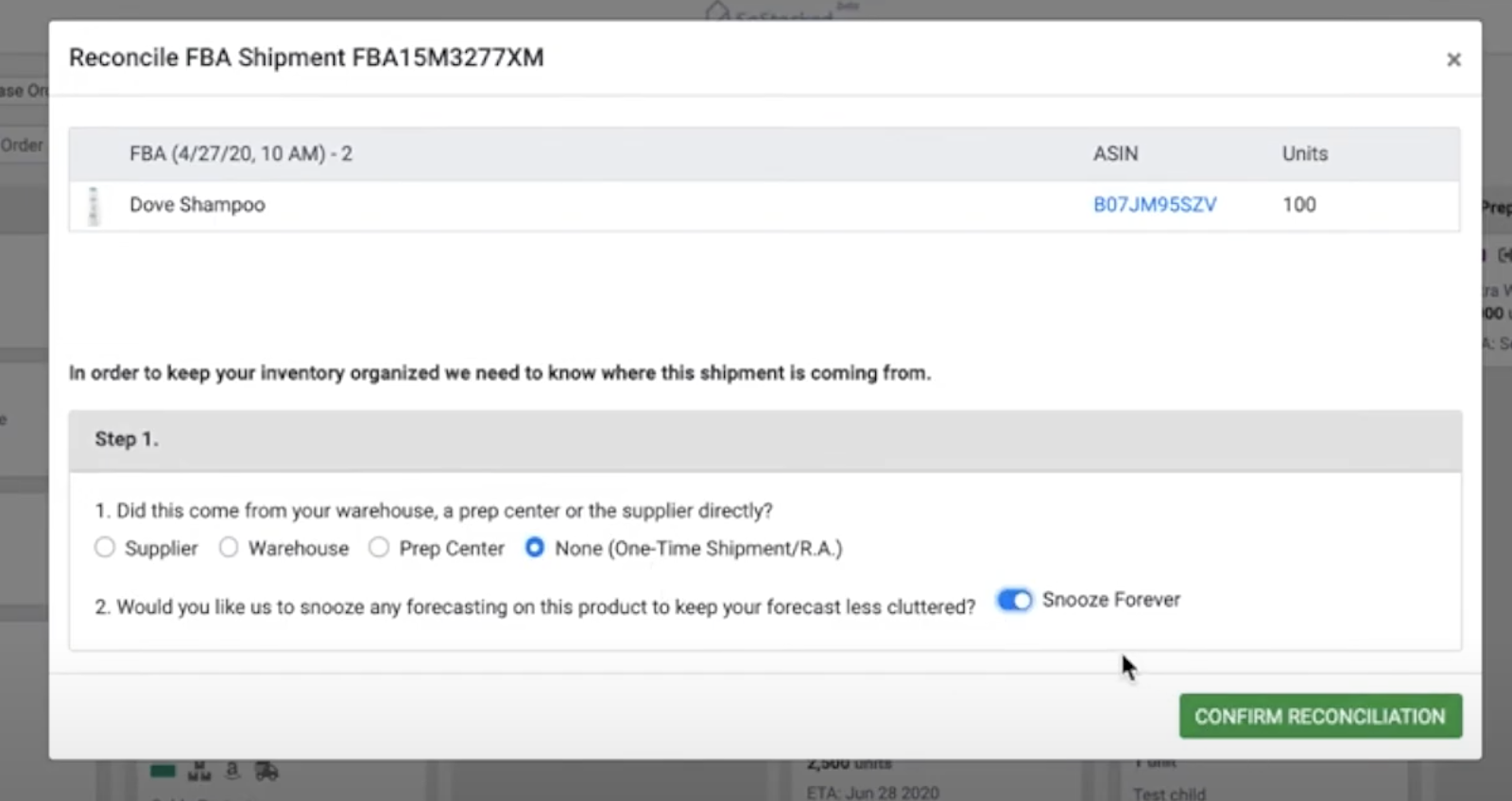 If you don't want to connect it to anything, for example, you are just setting up your account and we know about the one-time shipment, or you don't care to track this item, or you don't care to specifically associate it with anything. Maybe you don't have a purchase order and your ordering is so fast. If you have like a one week turn around and you don't care to create purchase orders.
You can just select " None" and mark it as a one-time shipment.
Now if this is an item that you happen to see, you know at Walmart and it was on sale and you said oh I can make some money on that with some Retail Arbitrage, you know that you're never going to sell this again and you don't want to track this at all. You can actually select " Snooze forever" and it's never going to track or tell you to reorder that product. 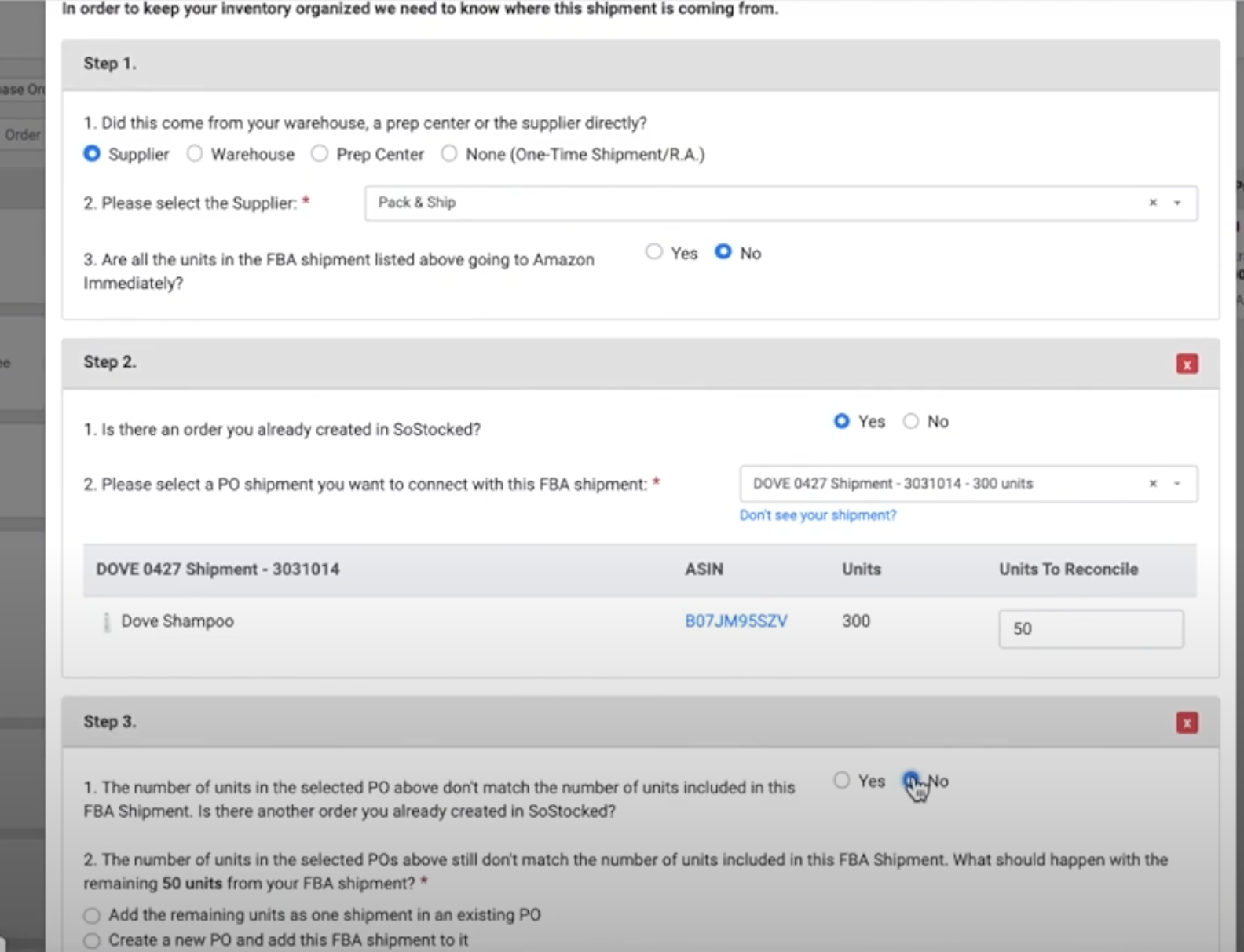 So the final piece that I wanted to go over is what happens if you're not sending all of the inventory to FBA or a Warehouse? For example, let's say that we're we've created a shipment and I have a hundred units of this product and I'm not sending all of it.
We have users who create orders in China, but they'll order 10,000 units from China and then warehouse 8,000 units (in China) and only ship 2,000. But they will create the FBA shipment for all 10,000 at the same time.
So they have 10,000 units in the Amazon FBA shipment tracker and they want to associate it to the FBA shipment in SoStocked, but they want it to record as going to their warehouse.
You select the supplier. Are all units going to Amazon immediately you can say, No.
Is there an order you created in Sostocked? We'll say Yes, and there's our order. Of these 100 units, you're only sending 50 so you are going to say I'm sending 50 now.
The number of units selected doesn't match. Is there another order you created in Sostocked? Select "No". 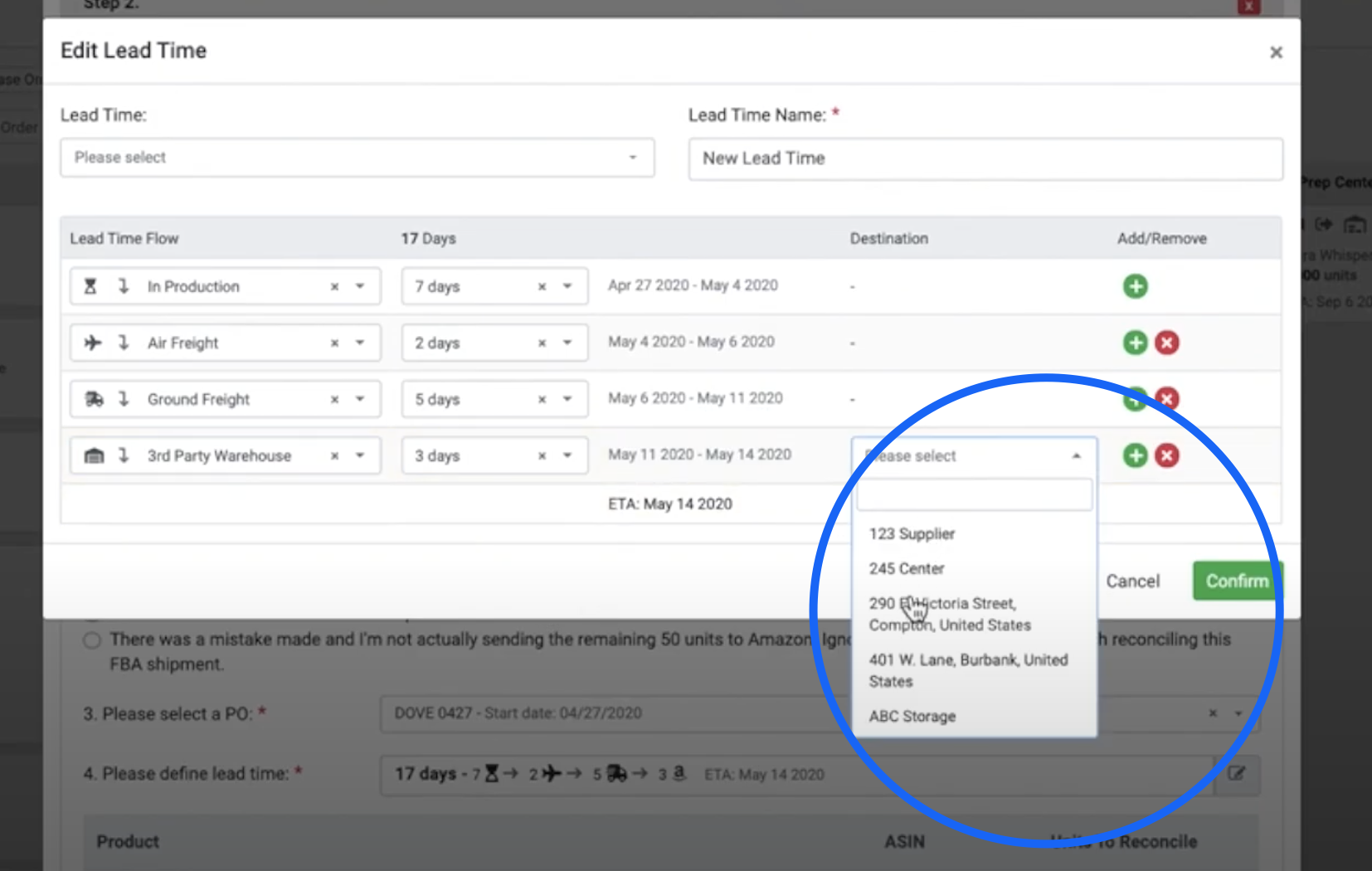 And the thing that we can do is we can actually add it to the existing purchase order.
We can change the location so we can say that it's not going to FBA. This one's going to our warehouse and you can update it. 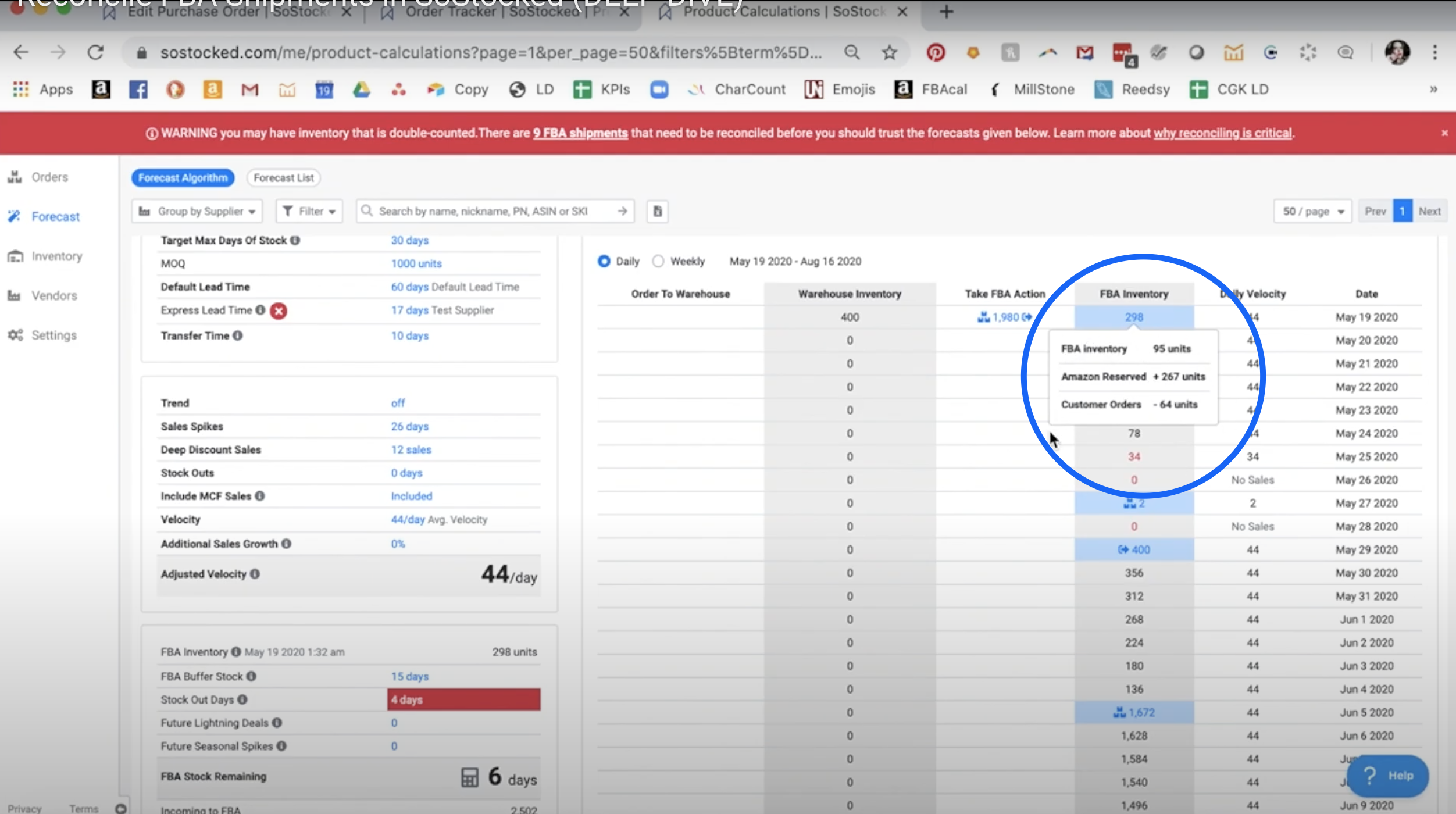 So 50 units are going to FBA and the other 50 still have labels on it, but it's going to your Warehouse.
So in this way, you're able to stop it from reporting to the software that your inventory is going to Amazon. So it's no longer going to show up in your Amazon Reserved. It's no longer going to show in your inbound inventory. It's going to show as arriving at your warehouse on SoStocked and then it will record in your warehouse at that point when it arrives.
So there are a lot of different ways to handle your inventory using the reconcile feature. I know it can sometimes see seem a little bit overwhelming but it's actually a very neat tool if you learn how to use it. And all you have to do is simply follow the prompts.
oOo